Pianos are beautiful pieces of robust yet delicate specimens of engineering artwork. Their complexity creates the illusion of simplicity and gives pianos their own unique sound. There are many key components that make up the mechanism of a piano, several of which are outlined in this article. There are also quite a few more components that are not as important to know about (and would take up too much space in this article!) in order for you to get a fairly detailed understanding of how pianos work. 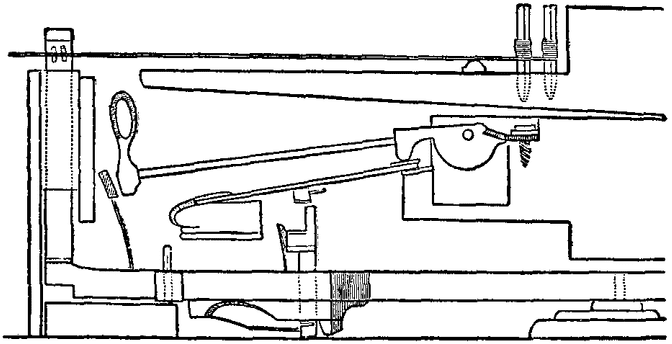 Obviously a piano wouldn't be a piano without the old ivories! If you have ever wondered why the keys are sometimes referred to as ivories, it is because piano keys used to be made from the ivory trunks of elephants (tragic, I know). Luckily, pianos nowadays use laminated hardwoods, such as oak or maple instead.

The piano's 88 keys (the standard on most pianos) are designed so that they amplify the player's fingers. This is accomplished by creating a lever that is much longer in the back than the front (the part where you play). This means that a small movement on the visible portion of the key produces a much larger movement on the other side, where the key strikes the hammer.

These are the workhorses of the piano. This is the component that will physically strike the strings inside the piano. The tops of these are usually covered in a thick piece of felt to give the string a nice warm sound when striking it. The physics behind this is that the felt gives the hammer a larger area to strike the string with, minimizing the possible higher order harmonics that can form from a smaller striking area. The striking portion of the hammer used to be made of a piece of rolled up paper and covered in a strip of leather. Times sure have changed...

When designing how the mechanism should work, Bartolomeo Cristofori (thought of as the inventor of the piano) was faced with a strange challenge: the hammer must be lifted up to strike the string, but must not remain near the string, otherwise it might bounce up and down, hitting the string more than once. To solve this, Cristofori designed a sort of 'jack' system that could lift the hammer up, yet release when it was high enough, allowing the hammer to fall back to a safe distance from the strings. Quite the ingenious solution in my opinion!

Pianos aren't just a collection of single strings; they actually have 2 or 3 strings for most of the notes. This allows the piano to create much more volume with each note because the hammer is striking twice as many strings! Most modern pianos have very large single strings (they are wrapped with more wire to make them even thicker) for the lower notes, while the middle and upper range of notes have two and three strings, respectively. This lets the higher pitched notes be played just as loud as lower pitched ones.

The strings must be tightened to enormous amounts of tension. This can be on the order of 10 or 20 tons of force after all the strings are tightened. This creates the need for a large and sturdy support system to attach the strings to. This is where the cast iron frame comes in.

This is usually made of cast iron, for its rigidity and strength. It must support the immense tension created by the hundreds of strings pulling on either end of the frame. This is almost always a separate structure than the soundboard, though in the early days of the piano, the soundboard and frame were one in the same.

This is the tone producer of the piano. It is designed to resonate and in a way, echo the sound that the strings make. The vibrations from the strings pass into the sound board, and it acts as an amplifier for the strings. That is why the larger pianos (Grand pianos, especially) can produce very loud amounts of sound, because they have a larger amplifier, the soundboard.