How to Read Music - Note Duration

These are the building blocks of great music; no composition would exist if it weren't for music notes. They tell the musician what note to play and how long to play it for.

As you may have guess there are several different types of notes, some are short, some are long. Some are louder and sharper than others while others are softer and smoother.

The different types of notes are outline here and so are the various accents and alterations that can go along with music notes.

A note about Time Signature

When talking about lengths of notes (how many 'beats' they last) we need to keep in mind that the time signature will have an effect on how many beats a note lasts. For the remainder of this lesson, I will be speaking only of 2/4, 3/4 and 4/4 time signatures which all have a four on the bottom, denoting that the quarter note receives one beat. Other signatures such as 6/8 or more advanced ones will be much more complicated to convey in this short article so I will stick to the standard time signatures.

This is the most common length of note. It represents one beat of a measure. In standard 4/4 time, it takes four quarter notes to complete the measure. That is where the name 'quarter note' comes from.

A quarter note is a solid dot with a straight 'tail' extending up or down.

The eighth note looks like a quarter note, but with a flag raised up to its stem. It is important to note that there is only one flag on eighth notes. You will soon see that other, shorter notes, have more 'flags'

In a similar fashion, the sixteenth note represents one sixteenth of a measure. It is played half the amount of time that an eighth note is. This is slightly less common, but you will most likely see these in places where the composer wanted a to create fast moving music.

The sixteenth note looks like a quarter note but with two flags on the stem, as opposed to one flag like the eighth note.

Even though a sixteenth note seems pretty fast, there are an unlimited number of times we could keep going in that pattern. We just add on another flag to the stem for each time we cut the duration in half.

Notes of this speed are rarely used except by snare drummers, who often have to “roll” their sticks to produce extremely fast notes like these. Wind instruments and the piano will likely never need to play notes faster than a 32nd note.

The half note is just what it sounds like it is. It is twice as long as a quarter note, or two beats long. It takes two half notes to complete a measure.

The half note looks like a hollow quarter note. It has an empty circle for the note and has the same style of stem as a quarter note.

The whole note is equivalent to four quarter notes, eight eighth notes, two half notes and intuitively, and whole measure!

The whole note is the simplest of the set, consisting of only a hollow circle, similar in a way to the half note, but without the stem and not slanted like the half note circle is.

It is sometimes debated whether a whole note in odd time signatures adopts the new length of the measure as its length, such as if in 3/4 time the whole note would stand for three beats instead of the usual four. This is NOT the case! A whole note will ALWAYS stand for four beats, not matter what the time signature is. Proper music is written to account for this, meaning in 2/4 time an entire measure is made up of one half note or two quarter notes because there are only two beats per measure.

This chart shows how the lengths of notes are split up, starting with a whole note down to sixteenth notes. 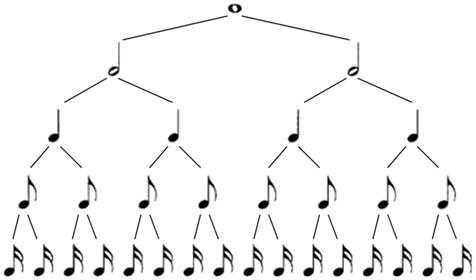 Not all music can be written with just these four notes. Composers need more flexibility to make other lengths of notes and to precisely tell the musician just how long to make notes sound. This is accomplished in a number of different ways.

Ties can be used to join two or more notes together and the length is simply the sum of all the individual notes, played as one long note. A note can also be dotted which means that it is played at one and a half (1.5) times longer than the regular version of the note.

An example of a tied note would be a half note tied to a quarter note to make a note three beats long.[  ]You could also tie 3 quarter notes together or it could be written as a dotted half note, which would both also represent three.