Pitch on the Piano

Pitch is an interesting thing...some people are said to have 'perfect pitch' while others are said to be 'tone-deaf' which I suppose could mean they have 100% imperfect pitch. I am a firm believer that the 'gift' of perfect pitch is not only highly sought after, but also attainable to everyone given the right practice and methodologies.

Pitch is what makes us say a sound is 'higher' than another or that something sounds very 'deep.' These common terms are in reference to the actual frequency of the sound. The higher the frequency, the 'higher' we say it is and likewise, the lower a sound's frequency, the 'deeper' we say it is. The same goes for pitch. High frequencies, high pitch...low frequencies, low pitch. It's a pretty easy topic to grasp and is understood by most people, regardless of their musical background.

Pitch on the Piano

Hopefully you never get tree pitch on your piano, I can't imagine how difficult that would be to clean off. Anyway, pitch, when we are talking about a piano, is in direct reference to what note is being played. Notes toward the left hand side (assuming you are facing the keys) of the piano get lower and lower in pitch as you move left and similarly, that pattern continues to the right. As you move further to the right, the pitch gets higher.

The musical alphabet is a short one...it only uses a handful of letters out of our English alphabet. Lucky for us, it's the first seven letters, A, B, C, D, E, F and G. Also lucky for us, they go in the same order that we say them in...A...B...C and so on.

The 8th note is referred to as one Octave above the first note. It also represents the first note of the next set of 7 notes, or octave. The reason the same note is reused is because the number one notes all sound the same except that they are different pitches.

Why are there black keys AND white keys on my piano? Why are they not all the same color?

These are good questions and I hope that this helps answer those for you.

Check out this diagram for a better understanding of the notes on a piano.

Notes on the Piano 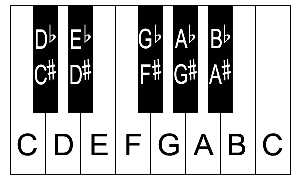